The Lawnmarket is situated close to Edinburgh Castle where the Army had its School of Piping so it was natural for the students to drop in for a chat and a tune on the pipes. They enjoyed these sessions so much that it was decided to meet on a regular basis and a Wednesday evening was chosen. They would finish around 9.30pm with a Piobaireachd when they would adjourn to the Eagle Bar across the road to catch the last 30 minutes of ‘drinking time’ before the bar closed at 10pm. This continued for several weeks before the owner of the Eagle Bar, Tommy Mowat, offered them a backroom in the bar which they gladly accepted.

Gradually the piping evenings expanded until George Stoddart and his friend, Pat Sandeman discussed the possibility of formalising them. Edinburgh was not served well with piping activities compared to Glasgow. There were two main societies in existence, the Royal Scottish Pipers Society and the Highland Pipers.

The Royal Scottish admitted only non-competitive, non-professional players and the Highland Pipers catered for all ages and strengths. It was absolutely right that the children should be encouraged and this society has done sterling work for many, many years but there was space for something in between where top professionals and non-professionals could meet on licensed premises and promote the best in piping whilst enjoying a convivial evening.

When Pipe Major Willie Ross retired from the Piping School at Edinburgh Castle, the Army took over the School of Bagpipe Music and later created the first commissioned piping rank as it was considered the officer-in-charge should have the status afforded to military band directors. 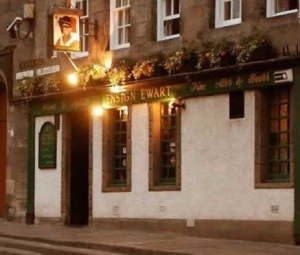 John A. MacLellan was the first to hold the post and George Stoddart and Pat Sandeman put it to him that they had a good idea for a new society. He agreed with them and the Eagle Pipers was founded in the ‘Eagle Bar’ (now the Ensign Ewart) The Lawnmarket, Edinburgh in 1960. The founder members were John A MacLellan, who became the President, George Stoddart as Pipe Major and Fear-an-Tighe, Pat Sandeman and students at the Army School of Piping, Edinburgh Castle. The students included Angus MacDonald, (Scots Guards) later Pipe Major, John Allan (Scots Guards) later Major and Director of Army Bagpipe Music, Joe Wilson (Gordon Highlanders) and Jimmy Henderson (Argyll and Sutherland Highlanders) who both became pipe majors of their regiments.

They continued to meet at the Eagle Bar until a Brewer firm took the bar over and they had to look for new premises. The Brewers, while not able to offer them space, did recognise the Eagle Pipers and named a table at the back of the bar ‘The Pipers Corner’. They quickly found a new home within the West End Hotel, Palmerston Place. The proprietor was Gordon Asher, former Pipe Major of the Gordon Highlanders, famous from the War Years as the bearded piper of El Alamein. The West End afforded much larger space and the Society began to grow in numbers and ladies were encouraged to attend with their husbands.

The Eagle Pipers had a close rapport with the Atholl Highlanders, the Duke of Athol’s private army and one of the highlights of the year was a trip to Blair Atholl and a ceilidh at night.  One thing that regularly fell down on though was the hiring of a bus.  They never seemed able to get a reliable one and always broke down on the way home. Such was the fame of the “Eagles” that the BBC made an announcement one year on the early Scottish News assuring all suspicious wives that the bus carrying members of a certain famous Piping Society had indeed broken down for the third year running.

Although currently located at street level, the original bar was in the cellar which extends under the Lawnmarket, one of several streets that together form the Royal Mile. The pub is a part of Milne’s Court, a building that dates back to 1690. The rear of the cellar is even older, dating back to at least 1590.

Entrance to the original cellar bar was by way of a passage which likely gave rise to its name of `The Hole of the Wall`, however, this passage was demolished when the west tenement was torn down in 1883. It was then that the bar moved to street level and later became `The Eagle`.

In 1964, the pub was renovated and re-opened with yet another new name – The Ensign Ewart,after Ensign Charles Ewart, who served with the 2nd Royal North British Dragoons (Scots Greys) and became known as `The Hero of Waterloo`. He charged forward and after a fierce sword fight managed to capture a highly prized Eagle standard of the French 45th Infantry Regiment. The Royal Scots Greys suffered 102 men dead, 98 wounded during the battle with 170 horses killed and another 70 badly injured. This was approximately half their regimental strength. The actual Eagle (below) and standard that Ewart captured is on display within Edinburgh Castle.

Ewart died in 1845 at the age of 77. His tomb lies on the Esplanade of Edinburgh Castle and the eagle he captured still forms part of the Regiment`s cap badge today.